In our classes at The Children’s Museum of South Dakota, we try to show the importance of cooperation and acceptance of other’s ideas. So when talking about creating a Rube Goldberg Machine in a recent engineering class, we also talked about how creating a working machine can be difficult, requiring teamwork to achieve our goal. With the children on board and nodding in agreement, we began planning.

We decided that before we start to build, we needed an idea of what we were going to try to accomplish with our machine. With this provocation in mind, children were eager to share their ideas.
“We could throw something in the trash can!” S.S. said. And with that, the floodgates opened. Ideas poured out of their mouths.
“We could throw paint across the room!” D.Q. chimed in. The group laughed but decided that while fun, they didn’t want to clean up the mess associated with that idea. As suggestions continued to flow freely, each idea was accepted as valid and discussed. Could we pop a balloon? How could we close the door? After much deliberation, the group eventually decided to try to shut off the classroom light.

Our next task was figuring out what steps we needed to take to turn the light off.

Here is the plan the children decided upon:

After creating this elaborate plan, the children split themselves into groups based on which part of the plan they were interested in putting into action. As they worked, successes were celebrated and failed attempts led to trying it again. Every challenge was an opportunity for problem-solving and persistence. I watched their community become stronger as they encouraged one another and collaborated on each task. 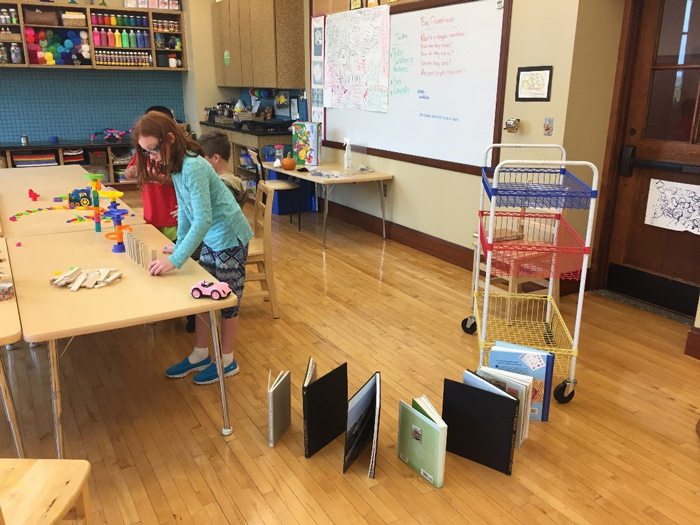 After an hour of work, we finally had a prototype to test. Would our Rube Goldberg Machine work?

C.K. released the marbles at the top of the maze and we watched in anticipation as the marbles shot around the twists and turns; but as they reached the end of the maze and tapped the first domino, they didn’t fall. Our machine did not work. Not on the first try, or the second try, or even the eighteenth try. The clock now reads 5:00 pm, time to quit, but the children don’t want to stop. After the twenty-second attempt, parents had to drag their children from the classroom as I assured them we would continue our efforts the following week.

Throughout this long process, the children never gave up or expressed even a hint of dissatisfaction. Every failed attempt presented a new challenge that the children eagerly accepted. This attitude continued into the following class, and the students were ready to give our Rube Goldberg Machine another go. This time we began class by reviewing videos I had taken of our previous attempts. S.S. found that the books set as dominoes were not applying enough force to move the cart.

This revelation led the group to try to create an improved version of our Rube Goldberg Machine. We added additional books and ultimately removed the cart. After we were happy with our final product, we started again. In just 6 attempts, we were able to create a successful Rube Goldberg Machine. The group was all smiles and expressed congratulations to each other about individual contributions.

Through these moments of problem-solving and perseverance, not only are the children learning about physics and engineering, they are learning to give respect to the ideas of their peers and that perseverance is powerful. It is these sentiments that they will carry with them through life.