Fossils offer opportunities to explore ideas about our distant past

The Children’s Museum of South Dakota has a collection of fossils that makes the rounds to area schools and is the feature of Pop-Up Play on the Museum floor!

Many people know that the Children’s Museum of South Dakota is home to two animatronic dinosaurs: life-size Mama T. Rex and her feathered son, Max. But what they don’t often know is that the Museum also has a nice collection of dinosaur fossils that have been gifted to the Museum since it was opened in 2010.

A few fossils are on display in our first-floor hallway and others are stored behind the scenes awaiting a time to spark joy and learning in our visitors.

One of those times is called Pop-Up Play. During Pop-Up Play, Museum play guides and staff pop-up with a program in addition to our regular museum exhibits.

And when the fossils come out, guests are able to investigate 65 million-year-old artifacts. This certainly is not an everyday occurrence for most people!

Taking time to examine dinosaur fossils allows us to partake in the theorizing that has been occurring about dinosaurs for centuries.

Additionally, we can experience a pure, child-like wonder as we marvel at these glimpses into the past. Fossils have the power to captivate people of all ages and remind us we are never finished learning!

Here is an introduction to some of the fossil pieces:

Dinosaurs lived millions of years ago but have only been discovered in the past few centuries. The word “dinosaur” originated in the 19th Century when paleontologist Sir Richard Owen compounded Greek words for “terrible” and “lizard.” Since the unearthing of the first fossils, many species of dinosaurs have been found around the globe.

The dinosaur fossil collection at the Museum consists of bones excavated in western South Dakota from what’s known as the Hell Creek Formation. Nearly all major dinosaur groups have been uncovered in South Dakota (as well as the remarkable “Sue” T. rex), and all of the bones in our collection have been identified as belonging to either Hadrosaur or Triceratops dinosaurs.

While the Children’s Museum of South Dakota has many fossil specimens, we do not own any Tyrannosaurus Rex fossils. But we are happy to have the next best thing in Mama and Max T. Rex, our animatronic dinosaur friends!

Hadrosaurs were a class of duck-billed herbivores that covered North America during the Late Cretaceous Period. These were some of the most common dinosaurs throughout the world. One of the most complete Hadrosaur skeletons was found in the North Dakota portion of the Hell Creek Formation in 1999.

“Hadrosaurs” represent a larger family of dinosaurs within which the Children’s Museum’s fossils can be further specified as “Edmontosaurus” bones. Although they mainly fed on plants and vegetation, each Edmontosaurus had over 900 teeth in its cheek pouch!

The Edmontosaurus was the largest dinosaur in the Hadrosaur family, sometimes standing 10 feet tall at the hips. No wonder most of the bones within the Museum’s collection belong to this dinosaur! 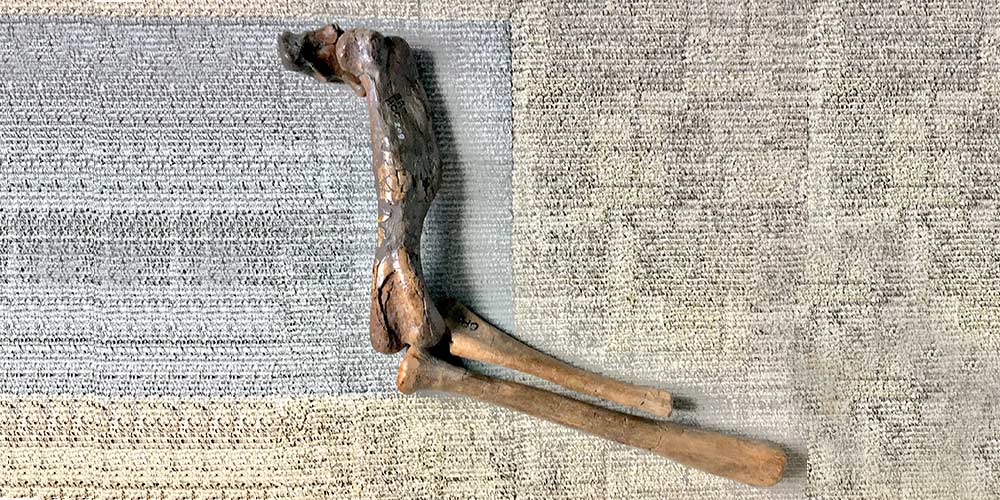 The Edmontosaurus typically walked on four legs but could switch to two-legged locomotion when necessary. This picture displays what would have been an “arm” or front leg. The bones included in the photo are a coracoid, humerus, ulna, and radius. 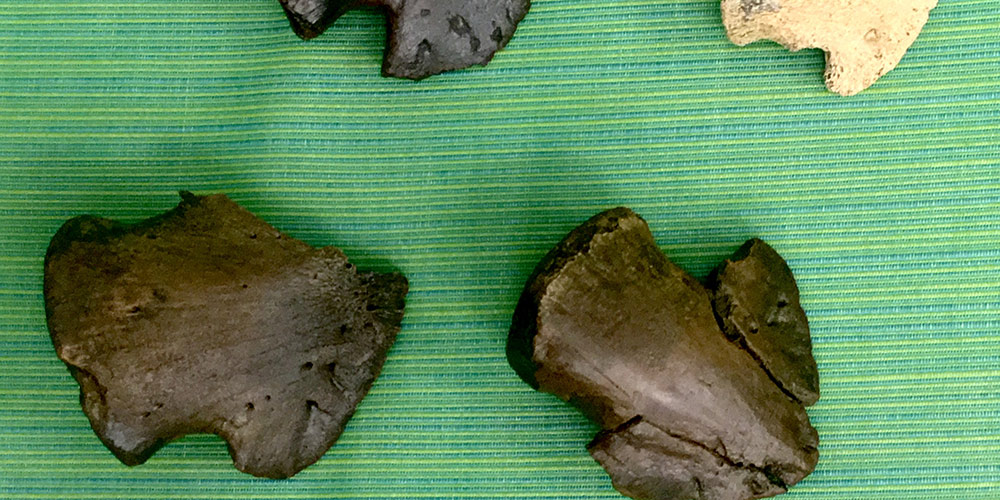 Hadrosaurs had feet that featured hoof-like nails. Pictured are some of the hoof fossils the Museum has collected. 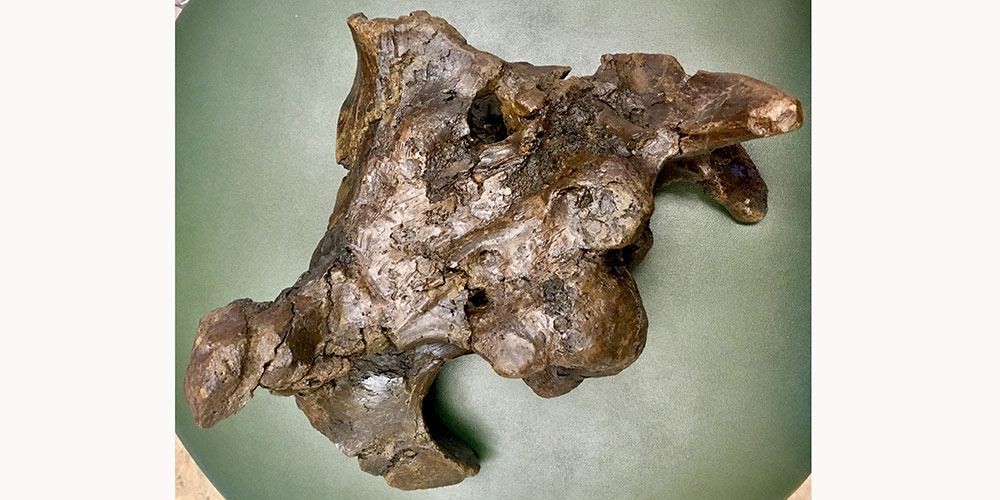 This oddly shaped fossil would have been part of the brain area of a Hadrosaur’s skull. Some hadrosaurs had a crest on their head, which might have been used for auditory functions. 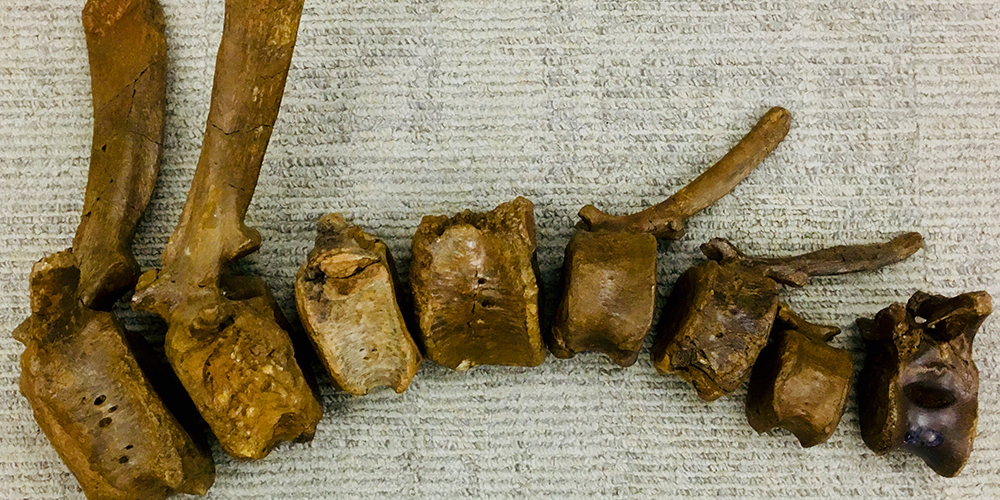 Triceratops were also herbivores from the Late Cretaceous Period. Commonly recognized by their frill and three horns, Triceratops species roamed across North America. These unique dinosaurs had the largest skulls of all land animals. One of the greatest found skulls was over 8 feet long!

Triceratops have been one of the most popular dinosaurs to be featured in film and other media forms throughout history. They certainly hold a near and dear place to South Dakotans, as the Triceratops was named the State Fossil in 1988.

The Children’s Museum loves these fossils and the opportunity to share more about South Dakota’s intriguing history! 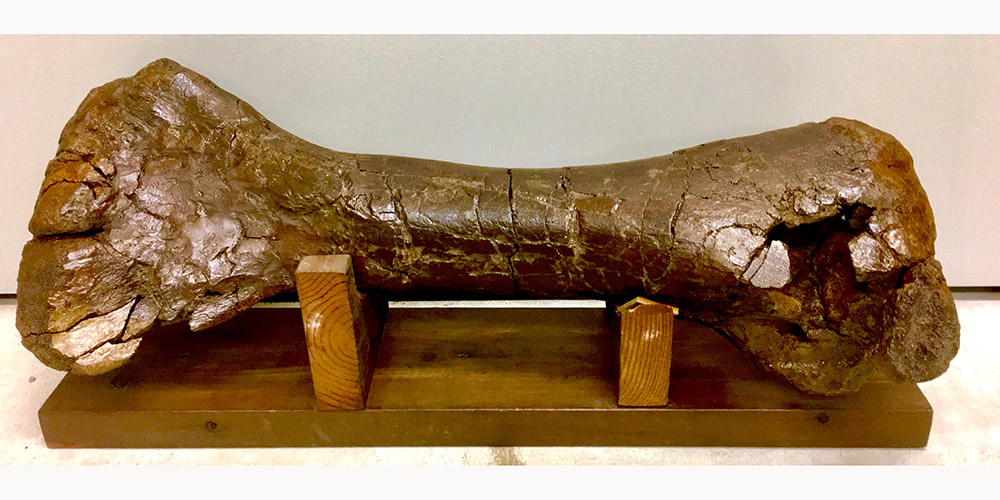 One of our largest fossils in the collection, this Triceratops tibia measures over two feet long! 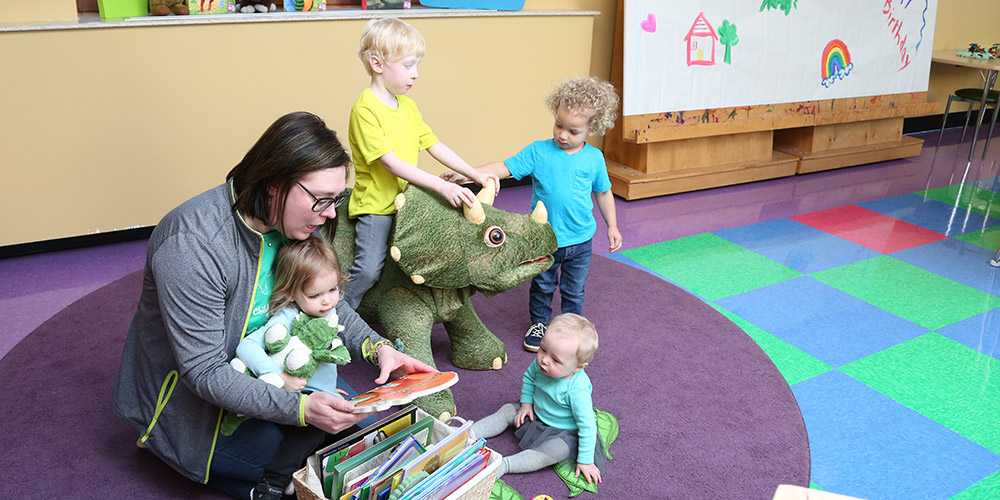 If you’ve been to a birthday party or other event at the Museum, you may have run into our animatronic Triceratops Kota. While Kota is not a fossil, she provides a fun learning experience for our guests! 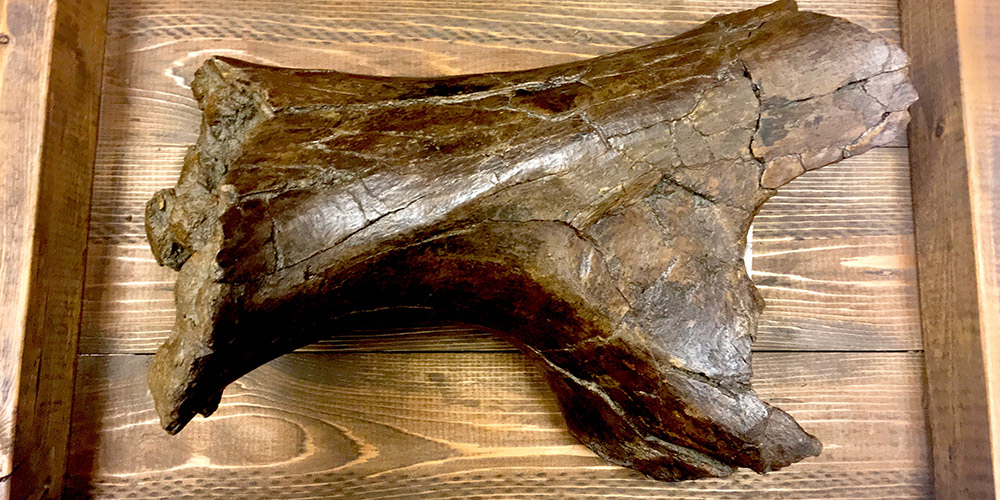 This Triceratops humerus is one of the Museum’s larger bone fragments. The end on the right side of the photo is assumed to have been chewed on by another dinosaur!

Remember the fossil collection next time you visit the Children’s Museum of South Dakota. Be sure to check out our large bones on display on the first floor. Or ask a staff member to see when the next fossil Pop-Up Play is taking place.

Fossils present extraordinary opportunities to explore ideas about our distant past. Scientists continually make new speculations about the time when dinosaurs roamed and what characteristics those dinosaurs possessed. We hope you’ll join us soon to bask in the wonder of curiosity and experience the joy of playful learning!

Explore dinosaurs with us! 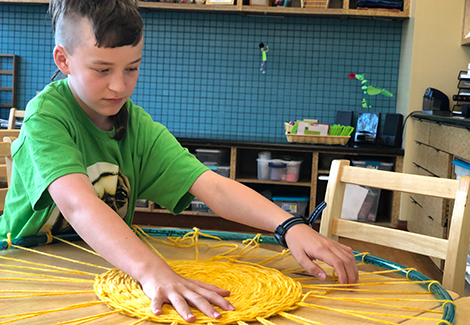 Inviting Children to Leave Their Mark

Inviting Children to Leave Their Mark