As our new Maker Studio grows from a dream to a fully-functioning space, the credit for the space’s essence really goes to the children who visit and mold each area they touch. One of the first children to feel a sense of ownership of the space was Louie. Like any kindergartener, he came into the studio with energy, a sense of wonder, and a love of technology. But his greatest love was for automobiles, most specifically emergency vehicles.

It was fate the first day Louie came into the Maker Studio because ramps and car-building kits were being featured. Louie walked in and instantly started to build. 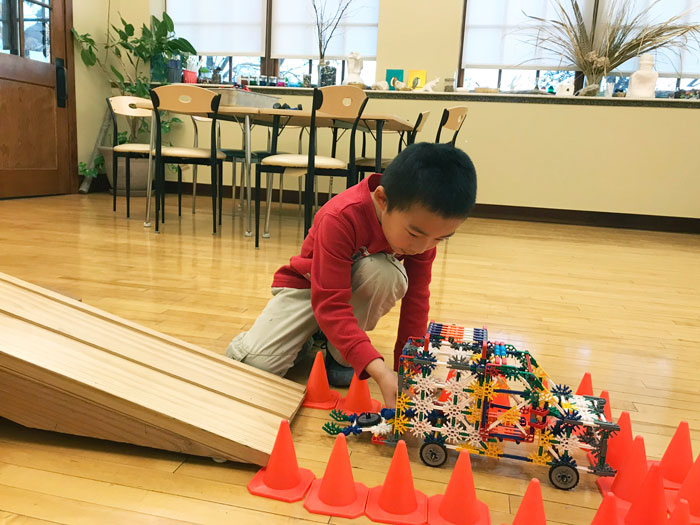 Over the next week, we followed a routine: We each would build a car. Louie built a police car, and I was assigned the “bad guy” car. Then we would act out scenarios where the police car would catch the bad guy and justice would be served.

After two weeks of this routine, Louie looked at me and said, “Jess! I’m bored!” I was shocked – I hadn’t been able to pry him away from cars for 2 weeks and suddenly he was bored? I began questioning him about what his interests were: Do you like building? Clay? Painting? Drawing? Finally, I got a “Yes. Drawing!” Louie excitedly told me that he could teach me to draw police cars.

Under his instruction, I gathered the supplies that we needed: a ruler, a sharp pencil, a thin black marker, and a circle template. As I sat down next to Louie, he took me through each step of drawing a car, naming each piece properly as if he had been studying cars his whole life. We spent the whole afternoon drawing, but then I drew the body of my vehicle too short and the Police SUV I was supposed to be drawing was now a police car.

“No, it’s supposed to be an SUV. It should look like mine.”

“Sometimes things don’t turn out how we think they will but that’s okay. If everything was the same wouldn’t the world be boring?”

Louie acknowledged what I said and went back to drawing. But for the next week any time he told me I drew something wrong I responded the same way: “If everything was the same the world would be boring.” It was through this phrase that Louie came to better understand that making mistakes was okay.

A few weeks later, Louie was drawing a truck. He drew the body of the truck far longer than usual. As he finished up his work he looked at me and said, “I accidentally drew the truck too long but that’s okay, right Jess? If everything was the same the world would be boring.” I smiled and said, “That’s exactly right, Louie.”

This anecdote exemplifies what the Maker Studio space was designed for. As Louie became more comfortable with making mistakes during his time in the Maker Studio, he also learned self-compassion and allowed himself room to grow.

Read the next step of Louie’s journey next week in “Making and Making Mistakes Part 2” where making mistakes can lead to learning compassion for others.