The Children’s Museum of South Dakota celebrated a big milestone on Saturday, July 30, 2011, as it welcomed its 100,000th visitor. Early afternoon, the Yee family from Sioux Falls put the museum over the benchmark. Seven-year-old Anna Yee, came to the museum on a school field trip earlier this spring.

Suzanne Hegg, Executive Director of the Children’s Museum of South Dakota, said, “We are thrilled to have welcomed 100,000 guests in just over ten months. Providing quality time for thousands of children and their families has been joyful work.” 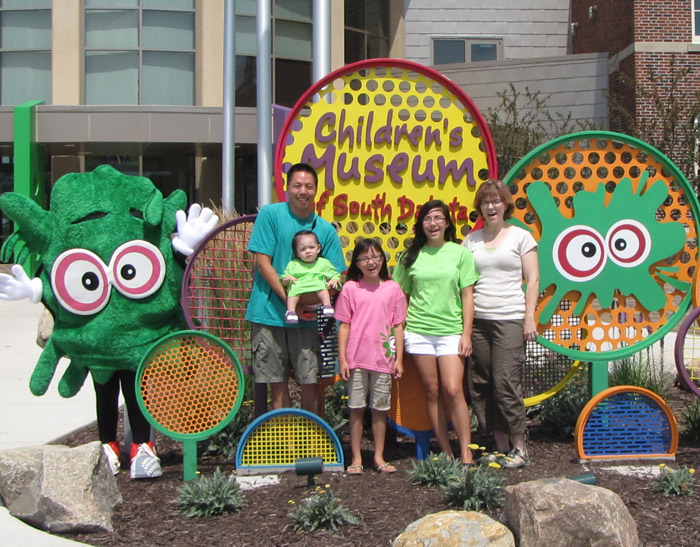 The museum is the state’s only broad-based, cross-discipline children’s museum and it is consistently drawing new visitors to Brookings including many museum members from the greater Sioux Falls area and southwest Minnesota. In addition to its educational goals, and its goal to enhance the quality of life in the region, the museum strives to draw new tourism to the community and to have a continuing economic impact.

South Dakota Governor Dennis Daugaard, congratulated the museum on behalf of the state’s tourism industry. “We are proud to have the world-class children’s museum as part of our state’s visitor industry,” the Governor said. “It has been an enhancement to our state’s family attractions and is drawing new tourism to South Dakota and the Brookings community. I’ve visited the museum twice, and it is outstanding.”

“The city of Brookings has seen a significant increase in visitor traffic since the opening of the Children’s Museum of South Dakota,” said Deb Garbers, Director of the Brookings Convention and Visitors Bureau. “The museum brings a new population of the family visitor industry to our current convention and tournament crowd. Along with this comes a significant increase in both economic impact and tax revenue for Brookings. We are excited to promote this new attraction and welcome all of the families and school field trips to our community.”

The museum opened its doors and welcomed its first visitors on September 12th, 2010. In just 27 short days of being open to the public, the museum had already greeted 10,000 guests. The museum has welcomed families from 47 states around the United States plus guests from all over the world including France, Germany, Russia, Sweden, Denmark, Canada and Guatemala.

The Yee family received free kidoodle branded t-shirts, 100 grand candy bars as well as a $100 gift certificate to the museum.