The Art of Weaving

Tangle Town, an installation by artist Patrick Dougherty, was constructed on the outdoor prairie of the Children’s Museum of South Dakota in May 2017 with the help of volunteers and museum staff.

Seventy-seven volunteers, ranging in age from 14 to 82 and traveling from as far away as Colorado, Texas, and California, contributed more than 600 hours to complete this project.

The 6 tons of saplings, predominantly willow, were gathered from 6 nearby sites and transported to the museum where they were woven together to create 9 silo-like structures. The structure stood on the museum’s outdoor prairie exhibit space for more than 4 years offering a place to play for children, adults, and animals.

Watch the video below and learn more about the project. 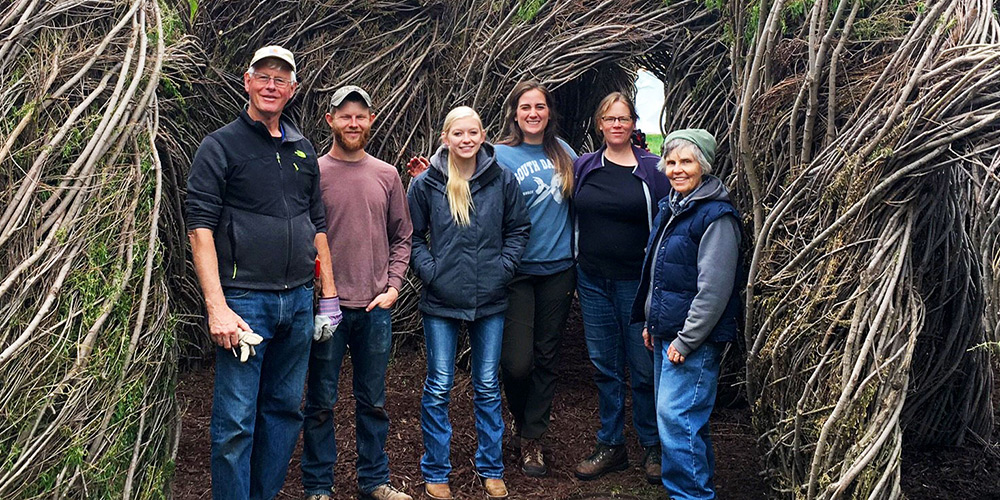 See the process behind the creation of Tangle Town

The Artist’s Description of the Piece

As I traveled across South Dakota, I was struck by the assortment of grain storage bins that populate every farmyard. Spanning different eras, these “container forms” harken back to ancient granaries, winnowing baskets, and ceramic storage jars. From my vantage point, these collections of shapes, some short, some tall, suggested a like-minded community situated with its back to the wind. My design for the South Dakota Children’s Museum emerged from these collections of familiar shapes. It includes nine structures that lean together and make a sticktown for small fry to explore.

The sculpture occupies a wonderful spot in the outdoor play area, and each element has a woven opening to the sky. These skylights add interest and will also help shed the winter’s snow load. In a further effort to extend the life of the sculpture, willow sticks buried in the ground are being encouraged to root adding some foliage as well as increased stability.

People in South Dakota are very handy and I was constantly amazed by the farm “know how” of the volunteers who helped with the construction of the sculpture. Despite the inclement weather, everyone arrived on time and ready to work.

I will fondly remember Brookings and the Children’s Museum as one of my best overall experiences.

As we put the final touches on the work, we became aware of an atmosphere of intense anticipation, a near child insurrection as we heard repeatedly, “Why CAN’T we go there NOW?!” We left feeling that we were leaving behind not just a sculpture that hinted of the granaries and silos that dot the South Dakota landscape, but perhaps containers of good will and community.

Combining his carpentry skills with his love of nature, Patrick began to learn more about primitive techniques of building and to experiment with tree saplings as construction material. In 1982 his first work, Maple Body Wrap, was included in the North Carolina Biennial Artists’ Exhibition, sponsored by the North Carolina Museum of Art. In the following year, he had his first one-person show entitled, Waitin’ It Out in Maple at the Southeastern Center for Contemporary Art in Winston-Salem, North Carolina.

His work quickly evolved from single pieces on conventional pedestals to monumental scale environmental works, which required saplings by the truckloads. Over the last thirty years, he has built over 250 of these works, and become internationally acclaimed. His sculpture has been seen worldwide—from Scotland to Japan to Brussels, and all over the United States.

He has received numerous awards, including the 2011 Factor Prize for Southern Art, North Carolina Artist Fellowship Award, Pollock-Krasner Foundation Grant, Henry Moore Foundation Fellowship, Japan-US Creative Arts Fellowship, and National Endowment for the Arts Fellowship. Princeton Architectural Press published a major book about Patrick and his work in 2009. This monograph, Stickwork, has received excellent reviews and is available at www.stickwork.net.

Tangle Town was never meant to last. Patrick typically describes the lifespan of his projects as, “One good year and one more year.” But it was the goal of the team at the Children’s Museum of South Dakota to keep the installation intact as long as it was safely possible.

In November 2019, with help from the Brookings Park, Recreation, and Forestry Department, 2 of the silos were relocated to the Dakota Nature Park. The remaining structure continued to be a place where children and families play hide and seek and where prairie animals find respite from the weather.

In September 2021, after making it through 3 South Dakota winters, the remaining portion of Tangle Town was decommissioned and also relocated to the Dakota Nature Park. It can be viewed from the walking path and will be home to rabbits, squirrels, and critters for months and years to come.

Portions of Tangle Town were moved to Dakota Nature Park