Make us a part of your vacation

Fill your itinerary with these South Dakota stops

From the hands-on historical discovery of the exhibits on Our Prairie to the hustle and bustle of the KidStreet community, at the Children’s Museum of South Dakota, your imagination is as big as our skies!

The Children’s Museum of South Dakota in Brookings is an easy stop along the I-29 corridor and Highway 14. Or take a short detour off Interstate 90. Couple your trip to the Museum with plenty of excursions to be enjoyed for families and outdoor lovers – all a short trip from Brookings, SD!

People spend anywhere from a couple of hours to all day playing, exploring, and sharing quality time together at our Museum. If you are curious about what else to expect, we’ve got you covered on our planning page. Otherwise, read on for more things to do with the family in our region.

The Brookings Great 8 is your passport to one-of-a-kind attractions in our community. From McCrory Gardens to the South Dakota Art Museum, from a stop at Nick’s Hamburger Shop in historic downtown Brookings to learning about history at the South Dakota Agricultural Heritage Museum, there’s a lot to see and do.

Once you’ve seen what there is to see in Brookings, be sure to check out this guide to Highway 14 on the South Dakota Tourism website or keep reading for other nearby family-friendly attractions. 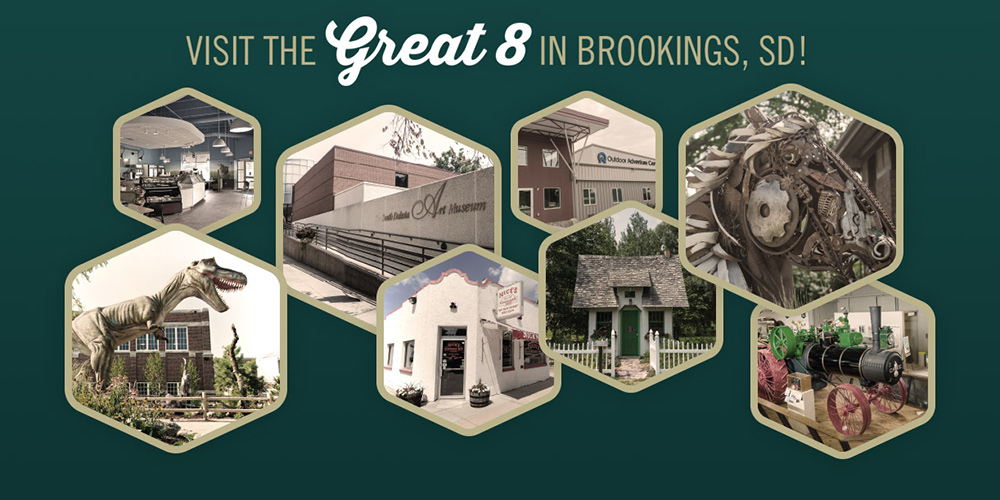 The Brookings Great 8 is your passport to one-of-a-kind attractions in Brookings, South Dakota

Within 30 Miles of Brookings

Located two miles west of Madison, South Dakota, Prairie Village has over 40 furnished buildings reliving the days of an active turn of the century main street. Visit sod and log houses, a country school, churches and one of the last remaining chapel railroad cars. Take a ride on a railroad train or on the 1889 steam-powered carousel. The site is open from Mother’s Day weekend until Labor Day.

Nestled among eight connecting glacial lakes, this park provides a variety of activities throughout the year, from hiking and swimming to ice fishing and cross-country skiing. The park also features campgrounds and picnic areas. Historically, the park was once used as a gathering spot for American Indians. The visitor center showcases an archeology display of items found in the area.

Learn about the benefits of wind power technology in one place. Interactive computers help to educate about the turbines. Walk underneath turbines to hear a gentle swooshing of the blades. Located in Pipestone, Minnesota, The Center is open to the public Monday through Friday. There are special hours for large groups.

For thousands of years, American Indians have quarried the red pipestone found at this site. These grounds are sacred to many people because the pipestone quarried here is carved into pipes used for prayer. Many believe the pipe’s smoke carries one’s prayers to the Great Spirit. The tradition continues today and visitors are invited to watch live demonstrations of pipes and crafts being carved. 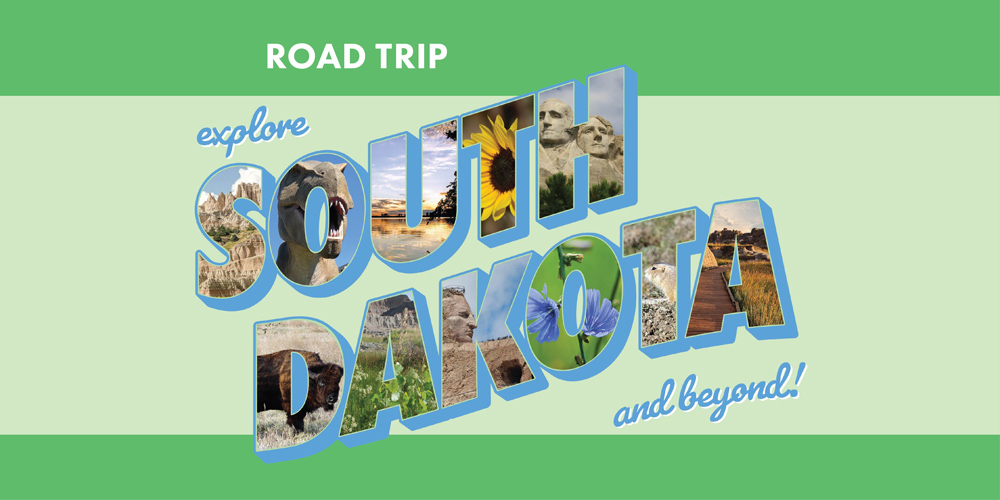 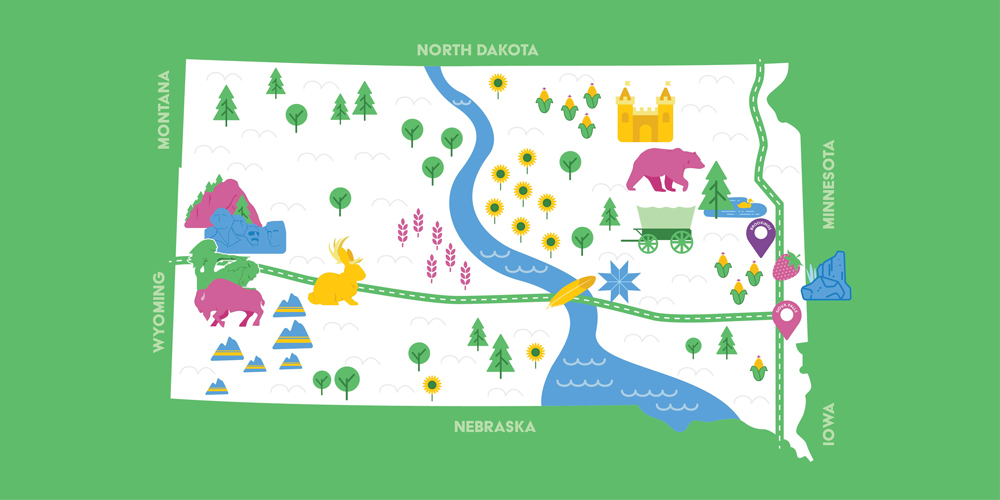 Within 50 Miles of Brookings

Legend has it that the notorious outlaw Jesse James made a daring escape at this site located within Palisades State Park. After robbing a bank in Northfield, Minnesota, Jesse James made his way to Split Rock River. To elude the lawmen that were chasing him, Jesse jumped the 15 foot split in the rocks, now known as Devil’s Gulch, and escaped to Missouri. A small footbridge now spans the gap of this infamous jump.

Fly a space shuttle, touch a tornado, and play with lasers. Housed within the Washington Pavilion of Arts and Science in Sioux Falls, South Dakota, the Kirby Science Center features more than 80 hands-on exhibits for science enthusiasts of all ages.

Explore the habitat of over 800 free-flying butterflies from around the world. Meet scorpions, tarantulas, frogs, and more. The Butterfly House & Aquarium has the only public saltwater aquarium in the Dakotas. This Sioux Falls attraction is open year-round.

The Great Plains Zoo and Delbridge Museum of Natural History

The Center for Earth Resources Observation and Science offers guided tours Monday through Friday. Learn how EROS began and discover what they do. View a large-format camera that was actually in space, a half-scale model of the Landsat 7 Satellite and satellite imagery from around the world.

When you visit the Bramble Park Zoo, located in Watertown, SD, you will encounter approximately 600 animals representing 130 species from around the world and those native to South Dakota.

Within 100 Miles from Brookings

Explore the grounds where the officers’ quarters, stone barracks, powder magazine, guardhouse, and other buildings remain at frontier Fort Sisseton. This 1864 fort is a rare reminder of the western frontier. This National Historic Landmark, located near Lake City, South Dakota, is a restoration of a frontier army outpost. The fort’s name comes from the nearby Sisseton Indian Tribe, and it is now a picturesque state park with campground facilities.

The Indian Village in Mitchell, South Dakota entices visitors to imagine what it was like to live in a 1,000-year-old former plains village. The Indian Village provides a link to native people who lived during the era of earth lodges and tepees and today’s American Indian communities. Visitors will have the opportunity to view an active excavation site. Discover engaging, and educational activities for the whole family.

These rolling hills (pronounced she-cha) were left after the last glacier receded less than 20,000 years ago. Through the centuries, these hills have become the subject of many legends. A journey through the area still reveals the natural occurrences that fueled the legends. Swamp gas and stumps glow in the dark, and small waterfalls are heard echoing as trapped air escapes. Horse trails and camping round out the activities at this National Natural Landmark.

Our great state is also known for:

There are four state regional associations that have travel information as well: